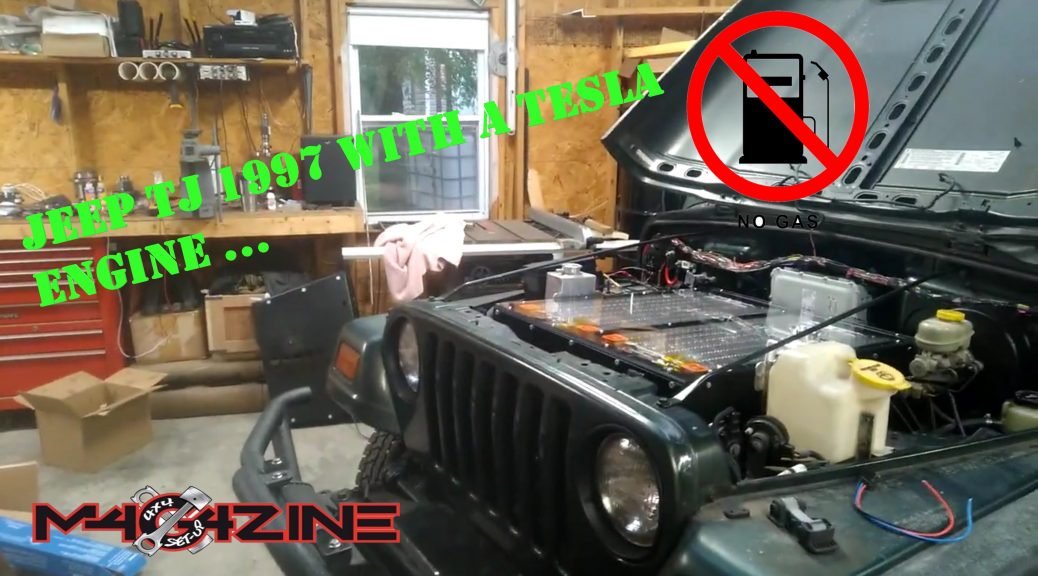 We love to present you unusual projects at the magazine. This week we have a very special one indeed… a jeep/Tesla… We came across this vehicle completely by chance on the web, and whether we like it or not the direction that technology is taking us more and more towards the electrification of our passion. Not all off-road enthusiasts are interested in this new technology, but for some it’s something else.
This is the case for Bill Bayer, the owner and designer of the Jeep/Tesla. We asked him to tell us a little about his project.

I grew up in Missouri dividing all of my kid-time between riding my bike and making stuff with Lego’s.  I even submitted an idea for a model once.  I received a very nice rejection letter and a fantastic poster of a Lego Space Shuttle.  In high school I took automotive mechanic vocational classes my junior and senior year.  After graduation I went to Rankin Technical College for Automotive Technology.  I never did get a professional job as a car mechanic though.

A few years after graduating college I joined the Air Force.  I served the first four years in England as a Tactical Fighter Maintainer on the F-15E.  For reason that escape me now, I voluntarily cross-trained into Weather Forecasting.  I did not like it at all but finished out my service retiring after 20 years.  While in the Air Force, I was deployed to Afghanistan.  There I began to question military politics and motivations.  Why do we fight?  It didn’t take long to determine that most of the time the reason is Oil.  This made me very angry but what could I do?  One day after giving a weather briefing to the deployed commander, I discovered a website called Electric Vehicle Television (EVTV.me).  The brains of the business was a now deceased man named Jack Rickard.  He converted a 1969 Porsche Speedster replica using Lithium Phosphate battery cells.  His philosophy was that if a fat man wearing yellow shoes falling down drunk can build a car that uses no gasoline and can travel 100mi on a charge why can’t car manufacturers?

Chris Paine proposed this very question in his wonderful documentary “Who Killed the Electric Car.”  Jack Rickard also suggested that all a person has to do is go out to his garage, sweep out a spot roughly the size of a car and go change the world!  I took this challenger very seriously.  I can’t change politics, I can’t stop wars over oil and energy security but I can reduce or eliminate my dependence on them.

I returned from Afghanistan a changed man.  A few years later I was stationed in New Jersey where my EV building began.  My first conversion to kind of get my feet wet was a 1969 Rokon that I picked up when I was in Alaska.  It originally had an awful 125cc two-stroke engine.  It was hard to start, not very powerful, smelled terrible and was noisy. I replaced it with a 5hp DC motor and a 48 volt Lithium Iron Phosphate battery.  (first picture).  It was a huge success.  My next project was a 1994 Ford Ranger truck.  I converted it using an AC induction motor from HPEVS and 144 volt lithium iron phosphate battery pack.  (second picture)  It, too, was a huge success.  I took it to every car show I could find for the next 5 years.  I discovered that not only could I stop buying oil but I could also spread the word about EV’s and how much better they are than gasoline/diesel burning vehicles.

It’s not only that they don’t use petroleum products and are arguably better for the environment.  EV’s are just BETTER!  They’re simple, elegant, efficient, quiet, smooth, fast and fun to drive.  More than that, if you go into your garage and make one, it’s absolutely the most satisfying thing you can do with your time and money.  It is not a way to save money.  A conversion will cost at minimum $15,000 (a little less than I put into the Ranger), in excess of $50,000 (what I have in the Jeep) and beyond.  The payback period is 10-20 years.  But what’s the payback period on your couch or big screen TV?  It’s not about money.

Moving on.  I retired from the Air Force and moved to Cape Girardeau, Missouri where I got a job at, of all places, EVTV!!  I worked with Jack for just over a year.  While there I finished a couple of conversions that they had started and did a complete conversion of a 1992 VW DoppelKabine “The Doka” using a Tesla Drive Unit.  At the time, it was one of the first conversions using a Tesla motor. (third picture of me and Jack)  There is a great short video of the Doka.  Search for Smoka Doka in youtube.

A gallon of gas has roughly 34kWh or energy.  That’s 13x MORE energy used to do the same amount of work.  13x more energy WASTED.  For the same amount of energy as a gallon of gas, I could mow my entire yard for an entire summer!  It’s obscene.  Every one has a mower.  Everyone wastes that much energy.  That’s exactly what I mean when I say it’s not about money.  Automobiles aren’t that bad.  They only waste about 4x as much energy as an EV.

I’ve built this as a no compromise EV conversion.  I’ve always loved Jeeps.  It started out as a stock 1997 Jeep TJ with a 2.5L engine and 5 speed trans.  I have modified everything on it.  The only thing I haven’t really touched is the body tub.  That’s not exactly true.  I converted the rear swing-out tailgate to a drop tailgate.  The suspension is a long arm kit from IronRockOffRoad.  You cut off almost all of the factory suspension mounts from the frame and axles and bolt in a center structure where the new suspension arms mount.

A truss is welded to the rear axle for the upper arms.  I also installed an over-the-knuckle steering kit.  I did this as much for it’s toughness as the factory steering arms looked ridiculous with the new beefy suspension.  I re-geared the differentials to 3.07:1, installed chromoly axles, installed a “lunchbox locker” in the rear diff, installed a rear disc brake kit and a disc upgrade on front. Ironically, the improved braking is largely unnecessary as EV’s have regenerative braking so the normal brakes rarely get used! From there I started making the mounts for the Tesla motor.  I’m using a rear Drive Unit from a wrecked Model S Performance.  The DU replaces the engine, transmission and transfer case.

It has up to 500hp and 425lbft of torque at the motor.  I replaced the factory 9.38:1 gears in the drive unit with 4.5:1 gears.  Those, combined with the 3.07:1 diff gears gives me a final drive of 13.8:1.  That’s basically like being in 1st gear all the time.  You can get away with this because the Tesla motor spins up to 16,000rpm!  I should have a top speed of around 100mph and a 0-60 time around 5 seconds.  The DU weighs 300lb.  The 4cyl, 5 speed and transfer case weighed 660lb.  Electric propulsion is dramatically more power dense than internal combustion.  I’m using a full 90kWh battery pack from a Tesla Model S or Model X.  It consists of 16 24 volt modules that each weigh just over 50lb.  Combined with the battery racks, the battery adds over 1000lb to the Jeep.  90kWh is equivalent to 2.6 gallons of gas.  2.6 gallons of gas would weigh about 20lb.  What weight I lost in the motor I gained back and more in the battery.

Gasoline is about 50x more energy dense than lithium batteries.  I ordered custom length drive shafts from Tom Woods Driveline.  They have upgraded 1350 Ujoints.  I’m using a 6.6kW battery charger that has a 1.8kW DCDC charger built it.  A DCDC charger changes the 400V pack voltage to 12V for normal car things.  1.8kW is about the same as a 140amp alternator except MUCH more efficient.

Did you know alternators are at best only about 50% efficient?  So, a 140amp alternator is actually a 280amp alternator except 140amps is wasted as heat!  Crazy.  Charging is done through a standard J1772 plug.  The same as you might see at a charging station outside a hotel or something. The Jeep will not be compatible with Tesla’s Supercharge network.

People always ask how long it takes to charge.  Well, that depends.  Did I run the pack down to the point where I needed a tow truck to get home?  Well, in that case it’ll take about 13 hours.  The real answer is I don’t know and don’t really care!  Why?  Let’s say I drive to work and then the store and then come home.  That’s about 50 miles.  That will use roughly 20kWh or my pack.  It would take 3hr to charge.  The reason I don’t care is because I just plug it in when I get home and forget about it.  I go inside, watch TV eat dinner and go to sleep.  It’s full in the morning.  Did it stop charging at 11PM?  Or 1AM or somewhere in between?  I don’t know.  I’d say this is the most difficult thing for non-EV owners to grasp.  You don’t EVER run the battery out…EVER!!   People will ask what if you drive to “X” location and run out of battery?  That is like saying what if you ran your gasoline car out of gas and the nearest fuel station is 100 miles away and there is no cell phone reception?  COULD that happen?  Sure.  Is it ever going to happen?  No way.  If you were about to drive your car on a stretch or of road that is 200 miles long and you know there are not any gas stations, will you start that trip without looking at your fuel gauge?  Will you do it without fueling up before you leave?  Of course not!  Same with EV’s.  Every single morning the Jeep will be full.  Every single morning, I’ll have 200 miles of range.  I can either drive 100mi in one direction and come back or I can go on 5 20-mile trips or I can drive 10 miles and plug it in for the rest of the day.  The next morning it will be full.

Future plans is to swap out the factory axles with one-ton axles from a full-size truck.  Until I do that I will not be able to realize the full power of the Tesla motor.  The differentials in the factory axles are not made for that much torque.

As of today, I’m still trying to get all of the motor parameters correct so it behaves the way I want it to.  Think of it like programming a fuel injection system.  Get a curve a little wrong and you’ll have very poor performance and could damage the engine.  Same with an electric motor.  Once that is sorted out, I have a 900 watt stereo system to install complete with a 10″ subwoofer.  I figure if you’re going to have a quiet vehicle, you might as well have a loud stereo!  🙂