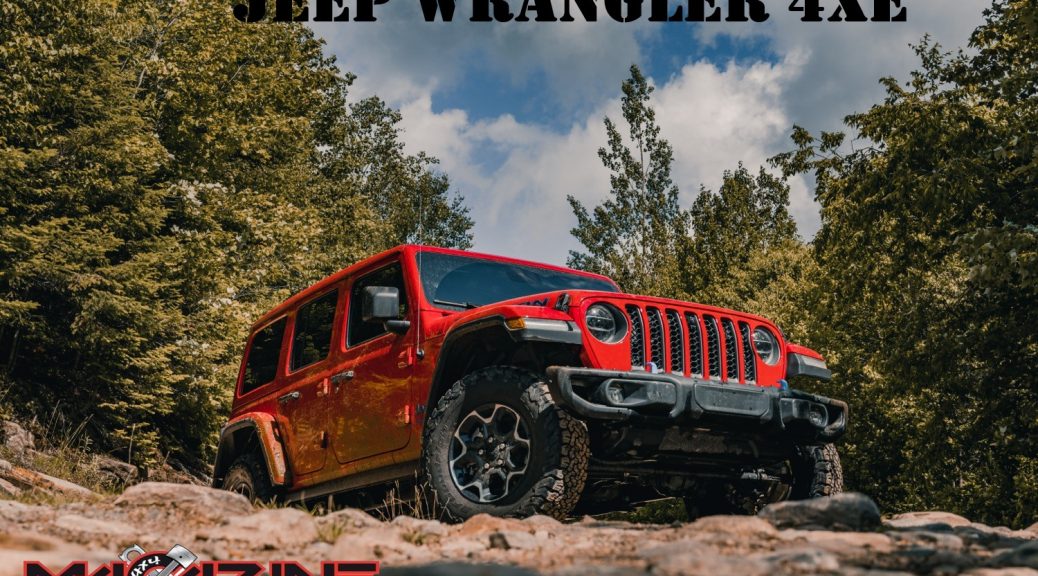 This week we are reviewing the Jeep Wrangler Rubicon 4xe. Our vehicle was assembled at the Toledo assembly plant in Ohio and has an MSRP of 74340.00 CAD before incentives.

The 4xe (pronounced 4 by e) is a plug-in hybrid, and no, it’s not comparable to a Prius. Naturally, we had no choice but to test its off-road prowess with the family. And, yes, we had to compare how it managed the trail when driving it in electric mode to its powerful hybrid powertrain. We chose a moderately difficult path where it didn’t sweat rock climbing, going through puddles of water and even sliding down a dune. We were able to do 95% of the 25km course in its EV mode. The only instance we required engine assistance was going up a steep, wet, rocky hill with lots of sand; we needed some momentum to give it that additional edge to climb these obstacles. When driving in electric mode, your surroundings become one with the Jeep. You can enjoy the wildlife to its fullest. Okay, maybe not the flies and the mosquitos.

Driving a Jeep Wrangler with the Sky One-Touch roof is an entirely different experience, no need to remove the top for a convertible vibe. Sure, you can still remove it; however, it’s so convenient to open and close depending on Mother Nature’s changing temperament. The Jeep Wrangler 4xe has an announced range of 34km with its 17 kWh lithium-ion battery; this range is more than realistic as we have been capable of doing up to 51km in the best conditions. Otherwise, we have been seen a range between 43 to 45km during mixed driving.

Under the hood of the 4xe, you will find a 2.0L turbocharged four-cylinder combined with an electric motor producing 375hp and 470 lb-ft of torque. This figure, just as a comparison, is as much torque as the Rubicon 392. While the power band isn’t the same, the acceleration of the 4xe still amazes with its 0-100km/h in under 6 seconds. To achieve maximum power, the Jeep needs to be in “4 high”.

As a family vehicle, the Jeep can handle up to 5 passengers. The seats in the back will seat 2 adults comfortably or 3 kids. On the flip side, the back seatbelts may not be the most comfortable ones for adults. They come down at an angle, and you may have the sensation of being strapped to the vehicle instead of buckled up. The driver and the co-pilot will have their bums nice and toasty in the winter. As for the driver, they also get the heated steering wheel with the cold weather group.

On the Hwy, like any boxed-shaped vehicle, you will encounter lots of wind noise. Over the years, the Wrangler has improved the overall exterior noise getting into the cabin. We expected this to worsen with the Sky-One Touch roof; yet, it wasn’t that unpleasant. We were somewhat disappointed that some of the security features are bundled up as options. One is the safety group that encompasses the blind-spot monitoring and the rear parking sensors. The advanced safety group gives you adaptive cruise control, advanced braking assists and forward collision warning. In our opinion, this should all be standard on the Rubicon trim.

The Alpine standard 9-speaker sound system will rock you on the road, off-road and with the rooftop removed. Overall it’s a pretty good system; we had the chance to use it at the drive-in theatre, and it worked like a charm. The infotainment still used the previous version of Uconnect; while it works fine in the Wrangler, some of the pages dedicated to the hybrid powertrain take forever to load. The system allows Android Auto and Apple Car Play to be used via a standard USB or USB-C cable.

The height of the vehicle may make it more challenging to place the car seats. A maximum of 2 car seats can be installed. When it comes to the actual installation of car seats, the hardware makes this hassle-free. The latches are bigger than in other vehicles and are also exposed. There are 3 anchor ports in the back seats that are well marked. As for the different car seats, the one that might result in the least comfortable position for front passengers is an infant car seat and will probably result in the passenger knees kissing the dash. As for rear-facing car seats, those will allow more legroom for passengers in front. As for any forward-facing car seats, they will require that you remove the headrest to install them freely. Finally, the booster seats are less than ideal in the Wrangle as the seat belts come from the sides, making the fit improper. Kids will also require assistance opening the doors and getting into the vehicle due to its height. It’s a small price to pay for a lifestyle vehicle that can bring the family almost anywhere.

As a city cruiser, the Wrangler 4xe makes so much sense. Mainly due to the +40km we achieved per charge. One day we were even able to reach over 100km charging it on 2 separate occasions. From empty to full, it takes about 2 hours and 50 minutes on a level 2. We found that it could take up to 30 minutes to charge from 99% to 100% and found ourselves often unplugging at 99%. Yes, that additional 1% often only gave us an extra kilometre, which shows that the battery management system has been set up to extend the battery life of your 4xe. Finally, the suspension is so comfortable that you can barely feel any road imperfections.

Why would we buy the 2021 Jeep Wrangler Rubicon 4xe, or what we liked about it? It’s a freaking plug-in hybrid Jeep; what’s not to like about it! A decent EV range, decent fuel economy can be achieved when driving smoothly. The Sky One-Touch roof was such a fantastic feature to use while on days with mixed weather.

Why would we not buy the 2021 Jeep Wrangler Rubicon 4xe, or what we did not like about it? The all-terrain tires make for average handling on paved roads, especially at higher speeds; the regeneration or battery hold system doesn’t seem to charge the battery quickly; we only saw this work while driving undulated roads. The hybrid powertrain can be jerky at times. The electric powertrain is quite loud.

Jeep has lent us this vehicle one week as a press vehicle. We have no affiliation with Stellantis Canada. The above is a recollection of our personal opinion of the car referred above.