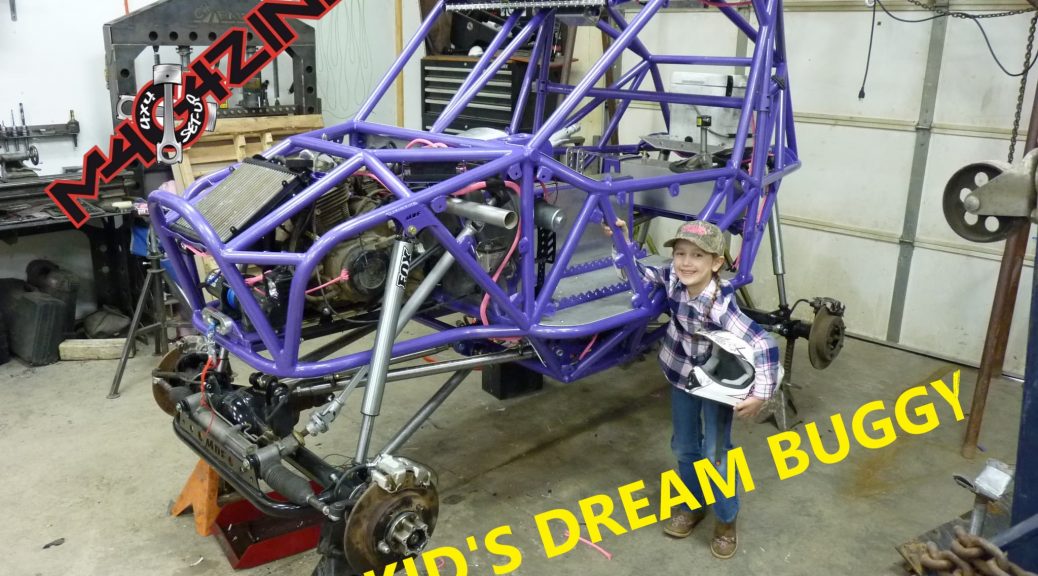 Like most manufacturing or modification projects in the off-road world, the original idea is often far from the final result. This is exactly what happened in the case of Jason’s project.

The initial plan was to modify a small Jeep-type children’s electric vehicle by manufacturing a 9″ dummy differential, a steel frame, and several other modifications to some of the smaller details. The toy was used for a few years in exhibitions but other ideas for modifications were running through the manufacturer’s mind constantly, including that of the addition of a motor and drive line. Jason’s biggest concern was that the pilot, his daughter, would not stop growing anytime soon. So, after a few views of a YouTube video on a child-sized crawler, he decided to move ahead with the project.

Despite 15 years of experience in sheet metal work and the management of his own manufacturing company (MADD DOG FAB LLC) for 5 years, it took him a full year of intensive research before starting the project.

After establishing the basic concept, it was time to source the main parts that would turn his dream into reality. Jason already owned a 2005 Artic CAT 400 ATV whose rear end had caught fire, making its parts ripe for repurposing. Therefore the CAT’s engine and transmission found a new home in the project.

Then a person in the area was trying to get rid of a Suzuki Samurai. Jason jumped on the opportunity and bought the Samurai’s transfer case and axles for the project.

More than 2 years has passed since Jason first began the project and the road has been long and sometimes difficult. Now that the project is nearing fruition, Jason and his wife and daughter are getting impatient to see the final product.

1: One of the first steps was of course to get a good idea of the correct size for the cage for driver. The use of a cardboard box is a classic and efficient technique;

2: Drawing of the chassis on the BendTech Pro program. This made it easy to correct any small problems. The file was then emailed to Travis Snider at Welder’d for cutting on a CNC machine (digital laser cutting) ;

3: : Picking up the chassis from Welder’d

6: Front and rear axles center section removed and replaced with a schedule 40 pipe cap. This makes it possible to rotate the third members to reverse rotation and make them high pinion. Some ATV engines turn the wrong way. Wile I had them apart we also shaves 1″ off the bottom of the housings.

8: Fabrication of the frame side link mounts.

13: Install of fabricated gas and brake pedals. Including floor rails to make them adjustable.

14: : Install of oil cooler, seats, and fabrication of all engine air piping

15: : Install of shifters, shifter cables, and engine to transfercase driveshaft

16: : 3D printed adapter ring for factory ATV display so it can be used without factory cover

18: Install of aluminum floor and firewall.

19: : Chassis stripped down and ready for final weld and powdercoat.

20: : Chassis back from powdercoat ready to be assembled

Little Mia is planning to take this season to practice and get familiar with the vehicle before competing next year in the W.E rock series.

None of this would have been possible without the help of some truly skilled people: Wyatt and Landon of Brown Fab-n-Weld, Travis Snider of Welder’d, Kody Horn, Cody Huls, Couton Wascher, Jeremy Corrignan, Bryan Hoffman’s – Jasons father and, of course, his wife Shayela Hoffman and daughter Mia who were not afraid to get their hands dirty and helped out throughout the entire adventure. Overall it’s been a great experience for Jason and his family, who, in addition to creating a great competition vehicle, have also had the privilege of creating unforgettable family memories.