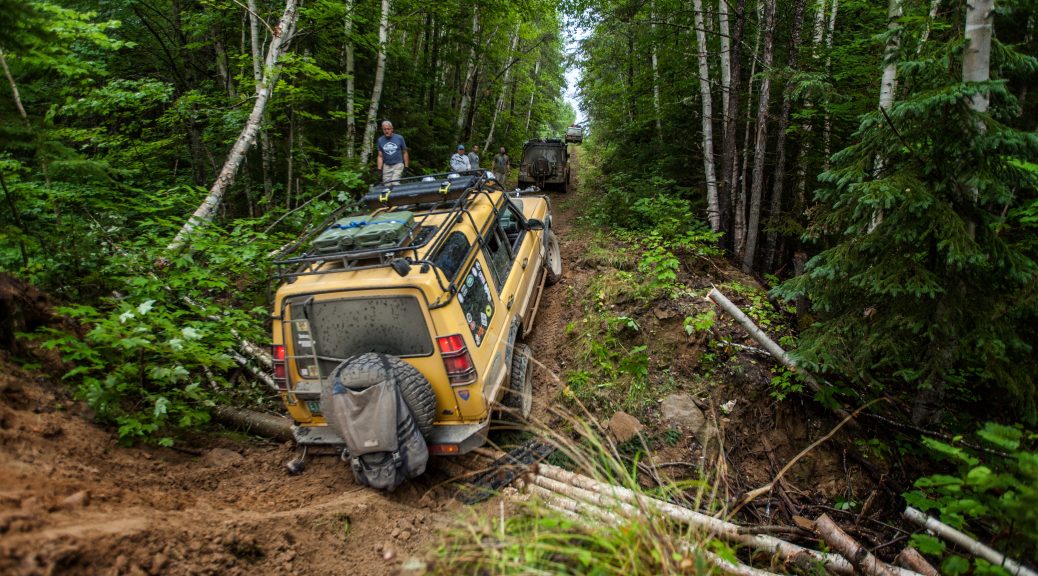 After a year of conceptualizing the event and countless kilometres of trail recon by East Coast Overland with the assistance of Explore The North and J. Diamond, August was the perfect month to run the NB Expedition Challenge here in NB. The vast swaths of mosquitoes that plague outdoor enthusiasts in the months of May and June have mostly died off, the swamps and mud pits of the spring rains have all but dried up and sun has had a chance to solidify the soft spring trails.

This year in particular the summer has been a very dry one, bringing little to no rain, until of course as luck has it, the night of the rendezvous for NBX 2017 and into day 1 and 2 of the event. The mud and rain set a dreary start to the event but it didn’t deter the 31 vehicles that had gathered for this adventure to kick into high gear and play around with their waypoints and Gaia App, that was provided for free through Gaia sponsorship. Day one was a shakeout day to get teams used to working together and get a grasp of the daily challenges that will be presented to them over the following 4 days.

Team Rubi Su on Day 2 on a muddy trail, somewhere in central NB.

Day 2 was the first day of challenges, with the trails still wet and muddy from the last 24 hours of rain, drivers started to realize that their skills and vehicles would be pushed during this navigation challenge. From tight overgrown trails to flooded trail sections, teams started to develop strategies how to best tackle the number of waypoints issued each morning. Some got stuck, some almost flipped over and most ended up winching their rigs through a very steep obstacle that very quickly became known as the “tank trap”.

Team Harrington from Vermont working their way through the Tank Trap, one rig at a time

Day 2 roughly went from the Doaktown area to Rogersville where the camp for night 2 was sighted in a clearing. Some people still struggling with the Gaia app, especially since the satellite image view is no longer available as in the older versions, it really created challenges to the users. Luckily we had Backroad Mapbooks on board for sponsorship that provided each team with a paper copy of an NB Backroad Mapbook, outlining the vast trail network this Province has to offer. The teams very quickly bonded with each other and new connections and friendships were made over the crackling camp fire, cold beers and stories of the day’s adventure.

The sun started to make an appearance towards the end of the day and with it came a rise in spirit and excitement about the adventure that lay ahead as the trails would lead the participants ever further north into the mountains of northern NB. Day by day the scenery was about to become more dramatic as the altitude would rise, the villages and with it, gas stations become more scarce and the remoteness of the region would become abundantly obvious.

One of the great things about events like this is the boost to local economy and in particular gas stations that lie along the route where everyone will stop by to fuel up, stack up coolers with ice, food and beer before heading back into the wilderness.

A member from Team Rubi Su in northern NB

As the teams started to depart camp on the morning of day 3, the weather was looking great and the forecast was even better with warm temperatures and sunshine. From Rogersville through Red Bank on into the Christmas Mountains, this leg of the journey displayed some of

the most spectacular scenery and trails this region has to offer.

Steep climbs, narrow rocky washed out trail sections and stunning mountain vistas summarize this section of the NB Expedition Challenge. This region is best known for Mount Carleton Provincial Park and the Christmas Mountains.  But these trails, as beautiful as they are, don’t come without a price to pay. Punctured tires, broken shocks, cracked radiators and other trail carnage was the result of this, making night 3 a collective vehicle repair night for many.

Team Fundy Ones conducting field repairs on one of their 3 TJs.

Just like mud was the flavour of the day for the first 2 days, dust quickly became just that for days 3 and 4. The long dirt roads, primarily used by logging trucks and the occasional ATV are notorious to kick up massive dust clouds that linger between the wood lines, reducing visibility and forcing drivers to increase the distance between their team members. With the compass still displaying North, teams blazed on across dusty dirt roads through the northern highlands, with temperatures pushing 30C. After 5 days, cold water became a very sought after commodity and most of the teams found just that at the end of one of the waypoints and seized the opportunity to refresh by taking a spontaneous dip in one of the lakes along the route. Nick and I had scouted out a location to end the event at that was more suitable than the northern town of Dalhousie that was the original intent and found a beautiful pebble river with clear water and beach, large enough to fit all the vehicles onto. While we waited for the participants to finish their waypoints for the day, we took a very refreshing plunge in the cold stream and reflected on the event as it drew to an end, already exploring ideas for NBX 2018.