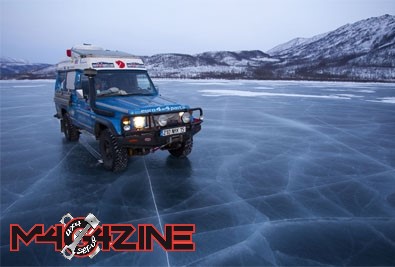 When we say to our partner “I’m going for a ride in my 4×4,” it means that we do not always know what time or even what day we are coming back. For Marc Mellet, going for a ride sometimes means driving 70 000 km and crossing 25 countries for 2 years. I’d like to tell you about this adventure, which put a 4×4 to the test in the true sense of the word.

Prior to this long journey, Marc had already tried, 7 years earlier, to reach Kamtchatka, a 1250-kilometre-long volcanic peninsula located in the Russian Far East which juts out into the Pacific Ocean. However, an accident (barrel roll) near the town of Magadan prevented him from carrying out his project. As Marc does not usually give up his goals, he set up a new travel plan to reach the volcanic peninsula. About two years before the big departure date, he met Jeanne-Sarah Savart who became his travel partner as well as the writer of the book which tells the story of their trip.

The two enthusiasts decided to begin their adventure in a Land Cruiser BJ75. They left in 2012 and went through Europe, Turkey, the Caucasus, Central Asia, Mongolia, Russia, and Japan.

Such journeys should not be undertaken with just any vehicle. The Land Cruiser was bought in 2001 for €6000 (Can$8954 today) with 270 000 km on the odometer. It had to undergo several modifications to accomplish its heavy task two years later. When the adventure started, the odometer already indicated 434 435 km, and 70 000 km were added with the journey.

Engine: Replacing the engine was the first major transformation. The original 3.4-litre 4-cylinder diesel engine (a 3b) only produced 90 hp, which was insufficient for the trip. It was replaced by a more modern Toyota engine from an HDJ80, a 12-valve 4.2-litre turbo diesel (1HDT) boosting the power to almost 170 hp. This modification forced Marc to also change the engine mounts, radiator, alternator, air filter, etc.

Fuel tanks: The vehicle was equipped with three tanks for a long range: the 90-litre original tank, a 95-litre Long Range Automotive central tank, and a 150-litre tank located at the rear. It may seem a lot, but it was necessary for a worry-free adventure.

Money: One of the first things, of course, that comes to mind when we hear about such a project, how much does it cost? In their case, they told me that they estimated their budget at €1200 per month, or about Can$1791. This amount included the required visas, food, some repairs, and fuel which accounted for half of the budget. They received money from a French off-road magazine. In exchange, Jeanne-Sarah had to write 7 article pages every month about their trip. They were also lucky enough to have a major sponsorship from Euro4x4parts which helped a lot by sending hundreds of spare parts during the trip.

I asked them what their typical day looked like. Here is their response: “Discovery and the unexpected have been our daily lot during these two years. There was no definite plan. Apart from visa constraints, we made our way at random and according to meetings. We ended up not driving much as we preferred to spend a few days at a place to enjoy it or its people. Our vehicle allows us to bivouac anywhere and be self-sufficient in nature or in the city. We slept mainly in our 4×4 or with the locals who invited us. We must say that our Land Cruiser is an incredible socializing tool. It draws attention and questions, and it allows us to meet people”.

“We have traveled in all seasons. There were periods of severe cold weather or very hot weather. In Siberia in winter, our heater, which had been damaged when we overturned the truck a few months earlier, refused to work when it was -40 °C. Fortunately, our duvets are designed for very low temperatures, and we slept with our shapkas on our head. In the end, the hardest part was not so much resisting the cold than managing our water supply. An hour to thaw a bottle every morning; enough to die of thirst in front of a large ice cube”.

Every day brought something new and exciting, but nothing could parallel the adrenaline rush that the adventurers had during the crossing of Lake Baikal. Located in southern Siberia, in eastern Russia, it is the largest reservoir of liquid freshwater on Earth’s surface, approximately 23 500 cubic km. The water is unusually transparent and clear, and one can see up to 40 metres deep. The lake is sometimes nicknamed the Pearl of Siberia. The adventurers drove some 400 kilometres on the frozen lake, sometimes in the middle of a storm, avoiding crevasses. They never lost sight of the fact that the ice could give way at any time. There, help is so far away that by the time it would have taken to arrive, they would have had time to turn into Mr. Freeze.

It was precisely the adrenaline and all the adventures that convinced them to write a book. It was no longer a simple journey but an adventure that they wanted to share with the rest of the world. Marc, who is a professional photographer, was able to bring a very personal touch, which we can admire in the book. There is also a book about Marc’s first trip: Davai Kamtchatka.

I also asked them about their next project. They already had a lot of ideas in mind. But first, they had to repair the Land Cruiser since it had suffered a bit on the last trip. A film about their adventure was not excluded from the possibilities. As for next destinations, they were thinking about Iceland and Africa.