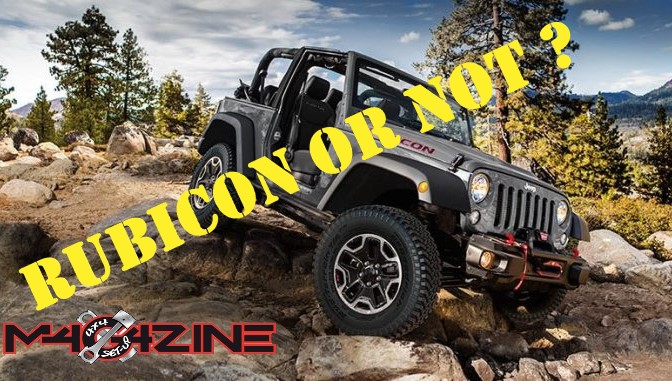 Should you buy the Rubicon? It depends…

OK, I see a lot of Rubicon owners who don’t even really know why they bought one. They wanted a Jeep, and many of their friends with jeeps told them “you definitely need a Rubicon” …

But what is the real difference between the Rubicon model and, for instance, the Sahara model? Many people say to buy the Rubicon because “you need that to go on the trails”, “it’s like a tank”, etc. And yet we could easily follow 90% of them on their trails – without a Rubicon.

Named after the famous Rubicon Trail in California, the Rubicon option has been available since the 2003 TJ. It’s actually a range better suited for off-roading.

There are several differences, but I think the most important are the following.

The Rubicon also includes a switch system on board to electronically disconnect the sway bar. The purpose of the anti-roll bar is to help reduce sideways tilting of the vehicle. When your vehicle tilts on one side or the other, the bar is forced to twist and resists the torsion which will force the wheel to adjust to a similar level as the other wheel. For instance, in a curve, vehicles tilt over toward the outside of the curve. The sway bar applies a counterbalancing force to the suspension to keep the vehicle as level as possible. While the anti-roll bar is very useful on the road, the fact that you can disconnect it when you are on the trails is a big benefit; your suspension can work independently and it gives a lot more flexibility to your front differential. Note that driving on the road with a disconnected sway bar can be very dangerous as it seriously affects the vehicle behaviours.

Another interesting feature is the transfer case’s 4:1 gear ratio allowing you to drive extremely slow. This will make your life easier when it comes to rock crawling. The Rubicon has 4.10:1 and the Sahara has 3.21:1 gears. Your gear ratio is the number of turns your driving shaft must make for every one rotation of your axle. The ratio is the number of teeth on the ring gear divided by the number of teeth on the pinion. The Sahara 3.21:1 gear ratio means that the driving shaft must make 3.21 turns for each rotation of the axle. A good gear ratio will give you a better balance between torque and speed. Like a bicycle, higher gears for going fast on the roads and lower gears for climbing steep hills.

But is all of that really useful? Unfortunately, a lot of people have been wrongly advised, and they think the Rubicon is an invincible war machine. In order to choose the right vehicle for you, you first need to know what you want to do with it. Generally for beginners, even the performance of a non-Rubicon model that is properly driven should give you more than enough. Many claim to be hardcore enthusiasts, but in fact most of them haven’t left a whole lot of stock parts on their Rubicon. For many people, a D44 is an HD differential, and more advanced off-roaders go through Dana44s like crazy.

If you go on easy trails 2-3 times a year and do nothing extreme, a non-Rubicon model would do the job and be a better option for you.

We take a stock 2011 Jeep Wrangler Sahara to see what it can do out of the box. This particular Jeep did not have locking differentials or mud terrain tires like the Rubicon.

If you wish to go on more difficult trails – but easier than advanced – and you think about modifying your vehicle (we’re not talking about led bars here), the Rubicon is a good start. Dana44s are more than enough for many people, lockers are already installed, etc.

If competitions or extreme, hardcore trails are your thing, you probably don’t need the Rubicon. Most enthusiasts at that level go through D44s non-stop and change diffs, gears, suspension, transfer case, steering (for hydraulic), etc. It doesn’t make much sense to buy the Rubicon and spend more money on oem parts if you are only going to replace them all.

In conclusion, it’s a matter of needs versus price. As the Rubicon is significantly more expensive, it’s important to determine your needs before you buy one. It’s definitely the option to go with for a better off-road performance. Non-Rubicon models are great as daily-drives and still do well on the trails.